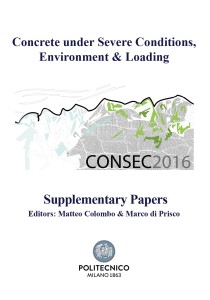 Concrete is, after water, the most widely used material on the planet, with global production estimated at between 21 to 31 billion tons a year. In 2016 a world population of 7.4 billion people has been estimated: this means an average of about 1˙500 liters of concrete per person a year. The statistical investigations on the water consumption per capita ranges between 3˙500 liters for a Madagascar inhabitant to 155˙000 liters for a USA inhabitant, showing how we are far from a sustainable use of resources.
Durability and serviceability play a key role for a sustainable progress of the humanity, decreasing the concrete request by extending the serviceability life of structures and infrastructures. Their role is emphasized under severe environmental or loading conditions.
Concrete is also the construction material that has changed more in the last twenty years increasing its main performance, the compressive strength, of more than 4 times, with a much lower increase in the cost due to the knowledge introduced in concrete technology by innovative chemical products. The growing use of fibres in the matrix have required the introduction of other performances like those describing the post-cracking SLS and ULS residual strengths in order to take into account the corresponding tremendous toughness increase in the structural design. The performance based design is nowadays orienting the concrete evolution: it is becoming crucial to quantify further performances aimed at guaranteeing the durability in severe environments and the risk mitigation of the structures when exposed to severe conditions. The international conference series, “CONcrete under SEvere Conditions/environment and loadings CONSEC” is an event focused on these subjects.
CONSEC conference has come to the 8th edition: Sapporo (Japan, 1995), Tromsø (Norway, 1998), Vancouver (Canada, 2001), Seoul (Korea, 2004), Tours (France, 2007), Merida (Mexico, 2010) and Nanjing (China, 20013) guested before this successfull event. The 8th edition is held in Lecco, at Politecnico di Milano campus, from September 12 to 14, 2016.
The CONSEC16 proceedings contain over 150 high quality peer-reviewed scientific papers aligned to the main topics announced: hydration and early age concrete properties, new design concepts and methods for long-term performance, performance of concrete under severe environment and loads, robustness with respect to loading hazards and sustainability of concrete structures, new and special concrete for (ultra-) severe conditions, repair and strengthening of under-performing structures, emerging fields and newly developed techniques.
During the preparation of this edition, two members of the Steering Board, Eric Moreno and Odd E. Gjørv, passed away. They significantly contributed to the research investigation on durability of concrete and to the development of this scientific event: the volume is dedicated to them. The conference is opened by a special session in their memoriam, to highlight their lesson and to witness the heritage left us, aimed at producing better concretes under severe conditions. The session will be introduced by the Chairman of the Steering Board, prof. Nemkumar Banthia, who will draw the past, the present and the future of this event, trying to highlight the contribution brought in these twenty-four years by these outstanding researchers to the CONSEC scientific community. Two good friends of them, Surendra Shah and Pedro Castro Borges, who shared many unforgettable moments of friendships, will trace their specific research and life paths.
A keynote lecture by Prof. Wittman is also dedicated to durability issues.
Thirty years ago Černobyl’ disaster took place: a special session devoted to nuclear risk mitigation – Assessment of nuclear containment vessels in severe conditions – coordinated by Alain Sellier and Benoit Masson is aimed at resuming the progress of the scientific knowledge on these critical subject, whose effects remind us the Fukushima tsunami, that five years ago devastated the
Japan coasts. The session precedes the session on robustness with respect to loading hazards. A second keynote by Nico Herrmann on a research project supported by European Community and finalized to this topic will open the session.
A special session in honour of Prof. Pietro Gambarova, to celebrate his 75th birthday on September this year, introduces several scientific contributions on “Concrete behavior at high temperature”. Prof. Gambarova twenty years ago has opened the way in the university of Politecnico di Milano to the investigation on the mechanical effects of fire damage on the materials and the structures.
Finally, we would like to thank all the members of the scientific committee for their great efforts in reviewing and finalizing the papers for the proceedings and those of the advisory and organizing committees for their careful job, as well as the sponsors for their financial support, without which this event would not have been possible.
Matteo Colombo and Marco di Prisco